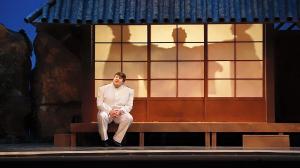 Contributed photoBrandon Miller is in love with the stage.

Miller, a junior Vocal Performance major, developed his passion for singing and performing while at Mercyhurst. Originally an undeclared major with plans to study nursing or science, decided to pursue his interest in vocal performance at the end of his freshman year.

Miller has since performed in a number of productions at Mercyhurst, most recently as the role of the villainous Pinkerton in the D’Angelo Department of Music’s rendition of Puccini’s “Madama Butterfly.”

“It was different because I’ve never done opera before in my life,” said Miller. “I’ve been a musical theatre kind of guy so it was a completely different experience.”

Miller has previously taken part in the Mercyhurst Theater Program under the direction of Brett Johnson, Ph.D., where he performed in “You’re a Good Man, Charlie Brown” as the titular character and “The Laramie Project” as a student in Laramie, Wyoming, pressured by his culture to suppress his desire to act. Miller himself has received no such pressure; or if he has, it has not persuaded him.

All of these performances, including singing in the chorus for the Music department’s production of “La Cenerentola” (Cinderella) last year, have led to Miller discovering what he plans to pursue as a career after graduation.

“It’s more tiring than any other thing I’ve ever had, but it was a great experience,” said Miller of his time in “Madama Butterfly.”
“I’ve come to learn that that is exactly what I want to do now.”

Miller has big plans after graduating, which include going to Chicago to pursue a more intensive education in Vocal Performance and someday performing at the Metropolitan Opera in New York, N.Y.

“Something about opera, it gives me this powerful feeling,” said Miller. “It has helped me learn to be confident in what I’m doing on stage.”

Miller does not take his craft lightly, however, and has spent hours studying and translating Puccini’s Italian opera since the end of summer 2014 in preparation for his performance on April 17.

“I will actually translate every word with a dictionary so I make sure I’m giving the exact translated word so I can relate it to the story,” Miller said.

Miller received help in familiarizing himself with the Italian pronunciations from Lydia Beasley, a part-time instructor of voice in the Music Department, who teaches a course in Diction for Singers.

“She is so nice and she helped me a lot with the Italian diction,” Miller said.

Louisa Jonason, an Assistant Professor of Voice and the Director of the Opera Program at Mercyhurst, was also influential in Miller’s journey to the stage.

“I wasn’t originally going to be Pinkerton, but I came in and [Jonason] realized that my voice kind of fit the part,” said Miller. “She was helpful in understanding what I could do with my voice and helped me to love music that much more.”

Taking on the role of Pinkerton, a cruel soldier who breaks the heart of Madama Butterfly, came as a challenge to the soft-spoken Miller.

“He’s a terrible human being,” said Miller of Puccini’s infamous character. “I’ve never played this kind of dominating, vicious guy who just wants… he doesn’t even necessarily want love… it was crazy for me to try and get into that character because I’ve never played anything like that.”

In the end, time, and music, helped Miller to understand and come to terms with his role.

“I think in the end I was definitely able to feel it. That’s where the music comes in as well. It’s all a part of one another, the music and the text,” Miller said.

A native of Erie, Miller sang in high school in musical and vocal ensembles, as well as in local performances at the Erie Playhouse, but he considers himself a late-comer to the music scene.

“I was kind of behind some of the other people,” said Miller. “Some of my fellow students have had voice teachers in high school and had done some musical studying, but I had not done anything until I got here.”

Though Miller said it was stressful joining the Music Department at the beginning of his sophomore year, he has learned how to handle the pressure and the demands of his field.
“It’s not ‘cut-throat,’ but you kind of feel like, ‘wow, these people are so far ahead’ and so you’re kind of taken aback. You just have to buckle down that much more and feel it and study it,” said Miller. “I feel like I’ve caught up, but I still have a lot of work.”

Miller said he has also enjoyed the benefits of being able to study in the Music department.

“It’s a smaller department in the school, so you have that time with the professors,” said Miller. “They [devote] individual time to go through anything you struggle with.”
Fellow Music majors also factor into Miller’s appreciation of his department.

“Everyone is so nice. We make time to be with each other,” said Miller. “It’s family-like. It’s great. I love it.”

Miller’s advice to students looking to break into the performance field, musical or otherwise, is to remain grounded and not to cut corners.

“You need to focus. You can’t be short on things. You have to make sure you follow the steps that people give you … If you really want to do it, you have to get the basics. That’s your basis, that’s what you go off of in music. You have to trust your teacher,” Miller said.

Despite his experience over the past two years, Miller still gets nervous on the stage that he has grown to love.

“I have some performance anxiety, I’m not going to lie,” said Miller. “I have to make sure I’m just breathing steadily. It’s just breathing and kind of realizing that you know it, and you’ve worked on it. You have to have faith in yourself.”