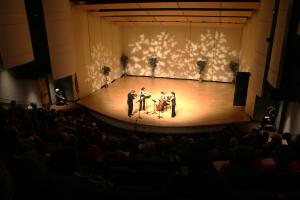 Ethan Magoc photoThe Visiting Artist series at the Mary D’Angelo Department of Music kicked off Sunday, Dec. 6, with a performance by the Biava String Quartet in the Walker Recital Hall.

The Quartet came to campus to perform a work written for them by Mercyhurst faculty member Dr. Albert Glinsky.

Glinsky was commissioned to compose the piece, titled “The Allegheny Quartet,” by the Pittsburgh Chamber Music Society for the 250th anniversary of the city of Pittsburgh.

Glinsky is a professor of music at Mercyhurst, specializing in both composition and music history. He has been recognized for his compositions on an international level, and his work has been both published and recorded by notable companies.

Biava String Quartet formed in 1998 at the Cleveland Institute of Music. They have won many notable international music awards such as the Naumberg Chamber Music award. They have held many notable positions, most recently the Lisa Arnold Quartet Residency at the Julliard School.

Many of Glinsky’s students came to the recital on Sunday solely to hear their teacher’s work performed.

Senior Kirsten Rispin said that hearing her mentor’s music come to life was a great experience for her as a composer wanting to hear current composers work. Usually she is only able “to listen to recordings, but hearing the music live allows for an entirely new appreciation for Dr. Glinsky as a composer,” Rispin said. 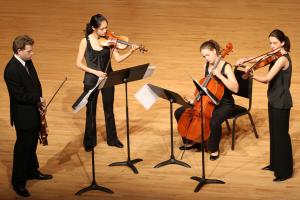 In a documentary shown before the instrumentalists played the piece, Glinsky said that he wanted to represent many different ethnic groups and nationalities in his piece and take the listener on a “journey through the evolution of the city.”

The piece is set up in four movements: “The Land at Diondega,” “Magaracs Dream,” “Men of Steel” and “River City Mecca.” Each movement tells a little bit of the story of Pittsburgh, from when Native Americans were settling the forest to the streamline metropolis it is today.