Marsh said she always knew her family structure was different.

"When I was little I would play house with the nuclear family setup – a mom, dad and baby," she said. "I understood early that it wasn’t the norm."

Marsh was home-schooled until the seventh grade. When she entered public school she was worried she might be made fun of for her non-traditional family.

"I was uncomfortable with a lot of people knowing I have two moms, but by ninth grade the nerves were gone," she said.

Marsh said she was never ridiculed.

"Everyone was just curious," she said. "I never had any problems talking about it."

When Marsh’s birth mother, Lucinda, and her other mother Deneen, or "Neen" as Marsh refers to her, decided they wanted children, they turned to artificial insemination.

"They were one of the only cryobanks that shipped directly to the mother," Marsh said.

Lucinda and Neen chose Donor 150’ because he was the only individual that explained himself as being "spiritual, soulful and creative," Marsh said.

From an early age Marsh’s parents shared the information they had about Donor 150.

"I was always really curious about him," she said.

When Marsh was 12, her grandmother watched an episode of Oprah featuring a Web site that helped donor children connect to siblings.

Marsh, with the support of her family, decided to sign up on the Donor Sibling Registry, a site that seeks to "assist individuals conceived as a result of sperm, egg or embryo donation that are seeking to make mutually desired contact with others with whom they share genetic ties," the foundation’s Web site says.

"It took two and a half years before I received a response," Marsh said.

In August 2005, 14-year-old Marsh received a letter from her half-sister, Danielle Pagano, who was 16 at the time.

"I was ecstatic," Marsh said. "This was the first real connection to the other half of my genetic background."

"It was amazing to know I wasn’t alone, to know someone else went through the same thing as me," she said.

The girls began to e-mail regularly.

"It was so strange," Marsh said. "I think we felt a connection from the beginning."

Still, Marsh admitted she was nervous.

"We had no guideline, no idea what we should do," Marsh said. "We didn’t know what the relationship should be like, but we were excited."

It took several months before the sisters felt comfortable enough to call each other.

Shortly after the call, the sisters were contacted by the New York Times. The Times wanted to do a story on the success using the DSR site.

"The first time (Pagano) and I met was after the interview with the New York Times," Marsh said. "I can remember standing in Penn Station looking at my half sister for the first time."

Within five days of the New York Times article, "Hello, I’m Your Sister. Our Father Is Donor 150," landing on the front page of the Sunday edition and over 300 publications around the world, the DSR site crashed due to high volumes of traffic and Marsh and Pagano were contacted by three other siblings.

More half siblings continued to be found in the following weeks.

"We found out Donor 150 was a really popular donor," Marsh said.

Although Marsh explained the experience of meeting siblings for the first time as "strange," she said the excitement was overwhelming

"There was no time to think about it," she said. "We were so into it that we wanted to learn everything about each other."

"I got better and better at the ‘Hello, I’m your sister’ e-mail."

Marsh said her parents and the parents of her siblings were very involved.

"Some were suspicious, others just excited," she said. "They all understood how amazing this was."

Of the siblings Marsh stays in contact with, two single mothers, three sets of lesbians and one heterosexual couple make up their parents.

Marsh has met six siblings and knows of six more. Some do not want to come forward, Marsh said.

"It’s normal to have so many donor recipients come forward," Marsh said. "We’re actually a minimal number compared to others."

Siblings weren’t the only relatives of Marsh reading the Times. Jeffery Harrison read the headline and choked on his coffee.

"He saw ‘Donor 150’ and ‘California Cryobank’ and knew we were his daughters," Marsh said.

It would take a year and a half for Harrison to contact the DSR and attempt to connect with his donor children.

Pagano received a call from the DSR on Valentine’s Day 2007 explaining that Donor 150 (Harrison) had come forward. She immediately called Marsh and the two decided to conference call Harrison the next day.

"We didn’t even tell our parents," Marsh said. "We were so excited we couldn’t wait."

Their parents weren’t happy they made the call without informing them, but the conversation went well, Marsh said.

"It went something like this: ‘Hi, we’re your daughters,’" Marsh said. "‘Holy moley’ was all he could say."

Since meeting her first sibling and speaking with her donor father, Marsh has stayed in regular contact with six of her half siblings. She speaks to or e-mails Harrison regularly and is in the process of making plans to meet him.

Marsh said Harrison’s more than "my hippie sperm donor father who lives in an RV on Venice Beach, Calif. with his two dogs… He’s family, and I feel like I need to meet him."

Marsh said she understands that some people don’t understand her non-traditional family, but hopes those individuals will try to be open-minded.

"We’re happy," she said. "However crazy, this new kind of family seems, it’s meant a lot for us to have these connections." 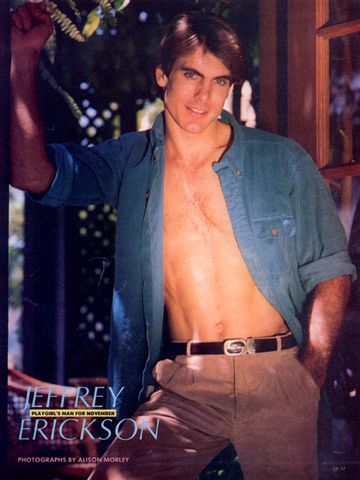 Jeffery Harrison was the centerfold on Playgirl .