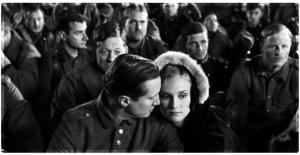 pac.mercyhurst.edu photoYou’ve all seen the news, read the papers, browsed the Internet and listened to the radio. Everyday there’s more of the same – pointless killing, senseless violence, incriminating scandals and malpractice.

Let’s face it: In this day and age, it’s often difficult to find the good in many situations. But every so often, usually when we least expect it, an illustration of humanity will show itself. Perhaps the most obvious of these experiences occurred on Christmas Eve, 1914.

Most, if not all of us, have heard this story through our various history classes, how in the midst of World War I an informal truce was called and Christmas was celebrated amidst the warring factions.

This week’s segment of the Guelcher Film Series, “Joyeux Noel,” lends a reality to this event which no history book could ever hope to capture.

“Joyeux Noel” focuses on one particular stretch of the front lines and the individual experiences of several individuals from all three sides. Sprink (Benno Furmann) is a German tenor who left the opera to serve the military; Jonathan and William (Steven Robertson and Robin Laing) are two Scottish brothers who joined the army to accomplish something with their lives. The boys’ parish priest, Father Palmer (Gary Lewis), is present as well, lending his services as a stretcher bearer.

The French are led by Lt. Audebert (Guillaume Canet), whose father (Bernard Le Coq) is the general in charge of the area.

On Christmas Eve, the Danish singer Anna Sorensen (Diane Kruger) is brought in to sing for the German officers, but insists on being taken to the front lines to sing for the troops and, hopefully, to see her lover Sprink.

The events that follow are inherently sentimental, kept from going overboard into ‘sappy’ by the poignant humanity which is displayed and the knowledge that in 24 hours these men will be killing each other again. Soldiers tentatively gather in No Man’s Land to listen to Sorensen and Sprink sing duets, to admire the thousands of Christmas trees set up by the Germans, to share stories of home and to bury the dead.

“Joyeux Noel” could easily be viewed as overly optimistic, except for the fact that these events actually took place against all odds. With the world we live in, such reminders of the good of humanity are more important than ever, especially at this time of year.

“Joyeux Noel” shows in the Mary D’Angelo Performing Arts Center this Wednesday at 2:15 and 8:00 p.m. Tickets are free for Mercyhurst students with ID.