Born in Hungary, he was forced out of his homeland for his criticisms of the Nazis. After living in Italy for some time, he moved to San Diego, where he lived for the rest of his years. 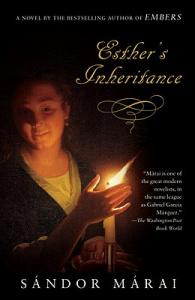 He is known for his most popular novel, “Embers,” as well as 47 others, including “Esther’s Inheritance.”

Translated from his native Hungarian, “Esther’s Inheritance” is the story of a woman who has been trodden upon and taken advantage of for her whole life. The love of her life, Lajos, is a pathological liar who took everything she had from her, even marrying her sister.

All she is left with is her house and garden, and she is content to live with only that, wanting nothing more than to live out her days in peace.

Twenty years later, she receives a telegram that Lajos is returning with her (now dead) sister’s children. Instead of notifying someone and taking caution to ward him off, she welcomes him into her home, knowing deep in her heart that he is back to take what he left the first time. Her actions portray that she has not learned from the last time Lajos came around and is still the weak woman she once was, letting Lajos have what he wants.

“Esther’s Inheritance” reflects upon the time period in which it was written. Modern feminist writing as a genre had not yet appeared; thus contemporary readers may be surprised by the take-advantage-of-the-weak-woman storyline.

As a believer in women’s rights, I was yelling at Esther the whole time to get a sense of self-respect and confidence in order to be a stronger woman and defend herself, but of course that did not happen.

“Esther’s Inheritance” is certainly a short book, at less than 150 pages, and a downright easy read. Save this for a rainy Saturday in which you have nothing else to do.