'Der Rosenkavalier' gets streamed to PAC

Another MET Simulcast opera will screen at the Mary D’Angelo Performing Arts Center (PAC) this weekend.

The opera is Strauss’s “Der Rosenkavalier,” also known as “Cavalier of the Rose.”

Due to previously scheduled events at the Mary D’Angelo Performing Arts Center, this simulcast has been pre-recorded but there is still a sense of anticipation by local opera fans. It will be shown on Saturday, Jan. 23, at 1 p.m.

“Der Rosenkavalier” is a three-act German comic opera written in 1911 by Richard Strauss and librettist Hugo von Hofmannsthal. The plot is of a love story between characters Octavian and Sophie. 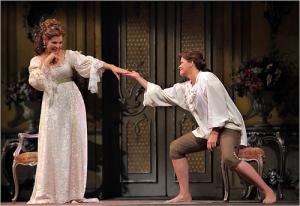 This production of Strauss’s “Der Rosendavalier” at the MET features many well-known names in the opera world such as mezzo-soprano Susan Graham as Octavian and soprano Renee Fleming as the aristocrat Marschallin.

These singers are joined by soprano Christine Schafer as Sophie and bass Kristinn Sigmundesson as Baron Ochs. Such a collaboration of talent will be sure to entertain everyone.

In Act III Sophie’s father is left to decide which man he favors for his daughter’s hand in marriage. A decision has to be made that only can be seen on the stage.

Tickets are available at the PAC box office before the show and are $18 for adults and $15 for students with Mercyhurst ID.