Visit to the world’s murder capital 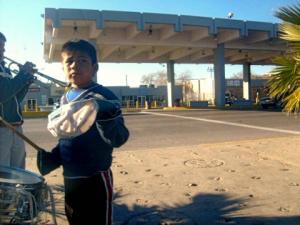 A boy from Juarez stands in the US – Mexican border begging for money.

Across the Mexican border below El Paso, Texas, lies a city filled with gore, agony, invulnerability and fatality.

With a passport in hand, and a camera in the other, I now pose as a victim.

As I entered the city, I stare at a sign that reads “Welcome,” then I look to my right and see 20-some soldiers standing with rifles protecting the border…lovely welcoming.

Five minutes into the city, we run into a jeep load of more soldiers ready to do their job.

Fifteen minutes into the city, police sirens are heard and two jeeps with soldiers go by at approximately 70 mph. Someone has been murdered.

Ciudad Juarez, Mexico, is commonly known as ‘The City of the Dead’ and ‘The World’s Murder Capital.’ It is one of the most dangerous cities in the world.

With a yearly death rate of 2,600 in 2009, this city is far from being the safest place for tourists, let alone for its residents.

Robbery, kidnapping, sexual assault, and drug-related crimes pose threats to the Juarez community and to its tourists. People from the city blame the situation on the drug war between Sinlalou cartel and the Juarez cartel who are battling over the smuggling route into El Paso.

According to El Diario de Juarez, a local newspaper, 99 percent of all crimes in Juarez go unpunished, which is why it is believed that police may be involved in a cover-up. The newspaper also states that one in every 889 residents are either killed or brutally abused each day.

For their own protection, residents are left with no option but to move out.

Socorro Lopez is among many who chose to migrate to El Paso. She filed her papers and has been in the US since June 2002.

She explains that she has not visited her “barrio” (neighborhood) since 2005.

“I had no desire to stay. My life was at risk for no reason,” Lopez said. “Friends of mine have suffered deaths of family and friends, but they have no papers to come to the U.S.”

Two months ago, Lopez and her family suffered as her granddaughter was kidnapped.

Luckily, she was eventually rescued.

With a worried look, Lopez said she fears for her son’s local businesses in Juarez. She informs me that gang members burn businesses if the money they have demanded is not delivered by a certain time. This money is then pocketed by members of the cartel.

“Things are going to get worse before they start to get better,” 63-year-old Sergio Gonzales said. “This city has no hope.”

With 129 deaths so far in January, the city has already started off the year in bad conditions.

With a passport in hand, a story in the other, and pictures on my camera, I bow my head and say a prayer for the safety of Juarez city residents.

After crossing the Mexican border into the States, I look back at one of the most dangerous cities in the world and exhale a breath of relief, for now I stand in the safety of U.S. territory.

Landscape of Ciudad de Juarez, Mexico. This empoverished city is also one of the most dangerous cities in the world. 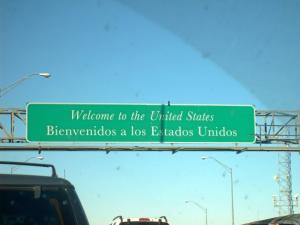 Chavez crosses the Mexican border back into the safety of the U.S. 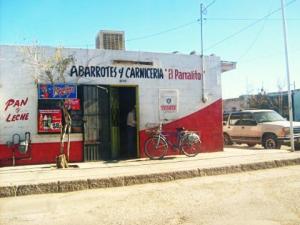 The city of Juarez is extremely poor. The picture shows a shop in one of the poor neighborhoods or “barrios”.