Motion City Soundtrack was formed in Minneapolis, Minn., in 1997 after co-founders Justin Pierre and Josh Cain left their respective area bands. The band went through several lineup changes throughout the years before settling on the current group, which consists of Pierre, Cain, Matt Taylor, Jesse Johnson and Tony Thaxton. 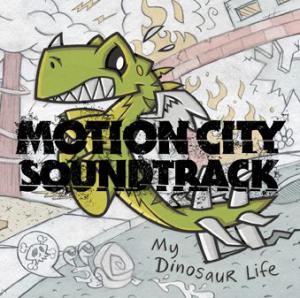 The first single from the album “Disappear” is reminiscent of lead singer Pierre’s unfortunate bout with drug dependency. The chorus, “I can disappear, anytime I want to, time I feel you, shuffle through my skin, I am with you ’til the end,” is a tell-tale sign of the feelings experienced by an addict.

The album’s second single, though, is much more upbeat. The song, “Her Words Destroyed My Planet,” is a throwback to Motion City’s early pop/rock-pop/punk sound. The music video for the single, which comes complete with a choreographed dance, also encompasses the band’s fun personality, as they are shown competing and winning against children in a science fair.

“My Dinosaur Life” also offers Motion City’s attempt at a love song with the simple “Stand Too Close.” The sentiment of, “If I stand too close, I might fall in, but if I’m too far gone, I’ll never win,” has an air of doubt, but when followed by, “and if you believe in me, I might just wanna spend some time with you again,” turns into a love song for the ages. (Well, maybe not – but we can dream.)

One of my favorite tracks on the album is “Pulp Fiction.” The lyrics are all kinds of random, calling out different items in pop culture, with references to “Miami Vice” and thoughts on karaoke, to name a few.

The album ends with the clever and level-headed “The Weakends.” The lyrics tell the story of a Friday night leading into the weekend, and the fights and issues that ensue involving the “weak ends.” It is this type of lyrical flair and clever hooks that Motion City Soundtrack fans love.

Motion City Soundtrack is currently touring across the country and has been added to the lineup for Warped Tour 2010.