This week’s addition to Mercyhurst College’s Guelcher Film Series,“Still Walking,” presents a story that almost anyone can relate to, in which a family who has experienced loss and dissatisfaction among themselves has gathered for a semi-annual reunion. The family’s oldest son, Junpei, has been dead 15 years after rescuing a boy from drowning. The youngest son, Ryo (Hiroshi Abe), is married to a widow (Yui Natsukawa) with a 10-year-old son, Atsushi (Shohei Tanaka). 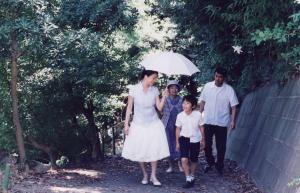 A.O. Scott of the New York Times describes “Still Walking” perfectly. He calls it both “transcendent” and “completely absorbing, so sure of its own scale and scope that while you’re watching it, the rest of the world fades into irrelevance.”

Perhaps the most memorable characters, though, are Ryo’s parents. Kyohei (Yoshio Harada), the father, is a retired doctor; he is an oppressive presence in the home. The mother, Toshiko (Kirin Kiki), is a force to be reckoned with in the kitchen, not as open in her opinions as her husband, but still obviously frustrated with what life has dealt her and her family.

The ghost of Junpei colors the proceedings. He is a continuous presence in the minds of those gathered, the ultimate driving force behind their temperaments, his spirit saturating the house. He is the measuring stick Kyohei uses against Ryo, evaluating the life decisions of his youngest against his dashed hopes for his eldest.

At its core, “Still Walking” is a movie about family. It is about the pain and frustration every family faces at one point or another, but it is also about the bonds of undiminishing love that hold them together. Writer-director Hirokazu Koreeda does a masterful job at showing this dynamic without making it melodramatic. The result is a warm-hearted, multi-faceted presentation that is equally likely to make you smile as it is to make you cry.

“Still Walking” is presented in Japanese with English subtitles.
It will be shown today in the D’Angelo Performing Arts Center at 2:15 and 7:15 p.m.

Tickets are $6 for adults, $5 for students and seniors and free for Mercyhurst students with IDs.