Vedera is a Kansas City, Mo.-based indie rock quartet. The band is made up of Jason Douglas on bass, Brian Little on guitars, Drew Little on drums and Kristen May on vocals, guitars and keys.

Although female-fronted bands are becoming less and less popular, Vedera’s blend of haunting indie melodies with poppy elements is leading them in the right direction. Their second studio album, “Stages,” was released on Feb. 2. 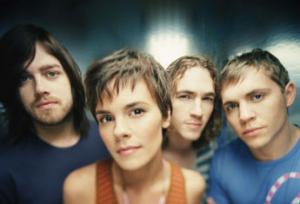 The album has repetitive themes of unrequited love and the importance of strong relationships, two elements to which everyone can relate. “Stages” opens with “Greater Than,” a song that yearns to figure out how “somehow we’re greater than our lonely fears.”

The first single off the album is “Satisfy.” The lyrics, “I don’t want to deny my heart its chance to feel, I don’t want to deny my soul something real, is there anything left in this world that will satisfy me?” demonstrate the need we all have to do what is best for ourselves, even if it’s not what we really want.

Vedera also channels the opposite in “Goodbye My Love,” a breakup song that simply states, “…go on and live your life; even if it takes you away from me, I know it’s right….”

Another song about broken relationships is “A World Apart,” which can best be applied to a lost friendship or a friend moving away. The lyrics, “…we’re trying to face the days a world apart,” chronicle the hard realization of separation. The song also talks about how strong relationships can outlast such a situation.

“Stages” closes with what can only be described as a ‘what if?’ song. “We Sing” asks the question, “…will it ever be you and me?” and gives examples in an effort to get noticed and form a desired connection.

Vedera’s beautiful lyrics and distinct sound have given them the opportunity to tour with such diverse acts as Underoath, The All-American Rejects, Mae, Mat Kearney and The Fray. This touring also has exposed fans of different genres to Vedera’s music.

Vedera is currently touring across the country with Fun and Jack’s Mannequin.