There are just three productions left in the Metropolitan Opera Simulcast season, and the next opera showing at the Mary D’Angelo Performing Arts Center is Verdi’s opera “Simon Boccanegra.”

Fitting the writing trend of most operas, “Simon Boccanegra” was based on another work, the play “Simon Bocanegra” by Antonio Garcia Gutierrez. He was also the author of “El Trovador,” on which Verdi based his opera “Il Trovatore.” The connections between great literature and opera are strong, and this opera is no exception. 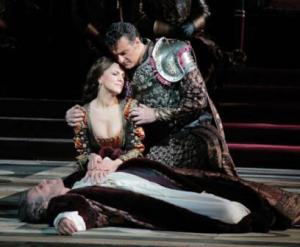 The opera was first performed in 1857 and, after numerous revisions, premiered in its current form in Milan in 1881. The opera takes place in the mid-14th century in Genoa, located in northern Italy.

In the opera’s prologue, Boccanegra is a pirate chosen to succeed Fiesco as duke of Genoa. Boccanegra accepts this position in hopes of being reunited with his love Maria, who is the daughter of Fiesco. Fiesco tells Boccanegra he will forgive him for everything he has done if Boccanegra will give him the illegitimate daughter, Amelia, whom Boccanegra and Maria had together.

Boccanegra goes to give his beloved daughter to Fiesco and finds her missing and Maria dead.

Act I takes place 25 years later. All this time Fiesco has been in disguise and taking care of Amelia, whom he thought was another orphan. Boccanegra recognizes her as his lost daughter.

Act II opens with two men pursuing Amelia, one of whom is also plotting to poison Boccanegra.

In Act III all the secrets of the opera are discovered and tragedy strikes.

Come see Verdi’s “Simon Boccanegra” at the PAC on Saturday, Feb. 13 at 1 p.m. to find out who dies, who lives and whom Amelia marries. The cost is $15 for Mercyhurst students.