Glinsky’s sculpture: An original work in the Cummings Art Gallery 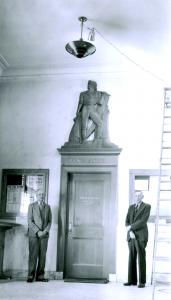 The exhibit now displayed in Mercyhurst College’s Cummings Gallery, “A Common Canvas,” features post office murals of New Deal artists commissioned through the Section of Fine Arts of the U.S. Treasury Department during the 1930s and ’40s.

David Lembeck, the exhibit curator, began researching and documenting post office art in 1995, and the exhibit debuted in 2008 at the State Museum of Pennsylvania.

While the exhibit is comprised mostly of photographed murals, one piece of art work, Vincent Glinsky’s “The Lumberman,” is a bas relief wood carving made out of mahogany. This piece is the only original work within the exhibit.

Vincent Glinsky (1895-1975) was living in New York City when he was commissioned to create “The Lumberman,” a sculpture for the head frame above the postmaster’s door at the Union City Post Office.

He was a well-known artist who emigrated from Russia at the age of 18 and studied at the New York Beaux-Arts Institute of Design, known for its competitive admissions and rigorous training. During his studies, Glinsky became a master of his craft, gaining skills that allowed him to engage in the meticulous detailing of his art, such as the lumberman, who captures the character of the rugged outdoorsman with his powerful shoulders and stature.

As the sculpture is crafted from wood, it is carved rather than cast from a mold. This method of carving sculpture captures the essence of artistic finesse and permanence as no stroke of the chisel can be taken back. In order to more effectively sculpt “The Lumberman,” Glinsky first made a full-size model of the sculpture out of plastiline, a non-permanent oil based clay. Upon its completion, the sculpture was installed in the Union City Post office in 1941.

Dr. Albert Glinsky, professor of music in the D’Angelo School of Music and son of Vincent Glinsky, believes that “The Lumberman” also offers an “artistic pun,” due to its representation of the lumber industry in Union City through its industrial medium.

While considering this irony, the work and the exhibit have much more to offer than punny humor.

“The Lumberman” is an excellent example of the positive attitudes toward industrialism during the 1930s and ’40s. Albert Glinsky says that these stylized paintings “idealized the worker and made him into a heroic figure in American history.” This period, coming out of the Great Depression, brought with it a great hope for the future and power of the individual.

Despite the different artists and locations of each of the pieces of post office art work, each reflect common color schemes and themes in regard to movement and a sense of individual place.

This exhibit, open Feb. 2-19, will feature the appearance of David Lembeck, curator of A Common Canvas, on Thursday, Feb. 11 at 6 p.m.

In the Cummings Gallery, Lembeck will discuss some of the fascinating stories that have emerged from his research. His discussion will be followed by a reception. Both the talk and reception are free and open to the public. 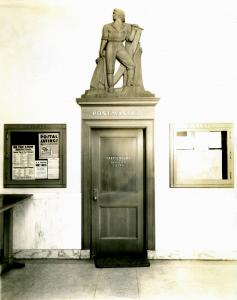