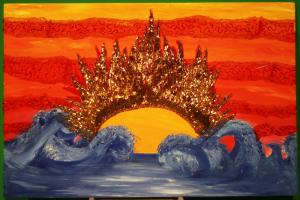 Zangaro is an intern at My Father’s House of Erie. As part of her internship, she helped develop the idea of transforming dresses into works of art as a fundraiser.

The auction, “Women in Transition: Silent Art Auction,” will take place on Monday, Feb. 15, from 6 to 8 p.m. in the Cummings Art Gallery.

Teams have turned the dresses they purchased into different items including paintings, lamps, pillows, clothing and table decorations.

At the event, people will have the chance to walk around and look at the transformed art. They can bid on pieces they are interested in by writing down their name, contact information and the amount they want to spend.

There will be from 25 to 30 pieces of art to bid on if all of the teams turn in their completed projects.

Winners will be notified at the end of the auction, but they do not need to be present during the auction.

Zangaro said she expects a wide variety of people to attend the auction.

“It will be a lot of students, a lot of family members of people involved and a lot of people from the community.”

People who want to see the transformed art but do not wish to purchase a piece are welcome to attend the auction as well.

“There will be a separate box to make donations,” Zangaro said. “I really encourage everyone to go.”

A video of some of the groups making their art will be shown at the auction.

The event is an opportunity for students to see how talented Mercyhurst students really are, Zangaro said.

Proceeds from the silent auction will benefit the Grace House Project. Grace House is a transition home for women veterans.

Grace House Project is affiliated with My Father’s House of Erie.

Women veterans can live and take classes there as a way to transition back into society.

After renovations are made, Grace House “will be the ninth facility in the United States that specializes in women veterans,” Zangaro said.

Women transition homes are important for women veterans because if they were sexually abused, many would feel more comfortable living in a women-only facility, Zangaro said.

Zangaro’s auction has “helped to raise awareness for Grace House,” she said. “They have gotten a lot of recognition for it.”

“The final artwork that has been turned in has been creative and wonderful and really showcases the talent of the participants,” Zangaro said. “Hopefully, a lot of people will come out and support the cause.”