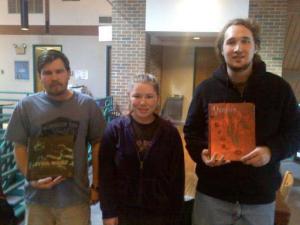 The new club hopes to play Vampire the Requiem and Star Wars as RPGs.

The Role Playing Game Club (RPG) is a new addition to the recognized clubs and student organizations on campus. The club, started by freshman Charlie Wheaton, is not to new to Mercyhurst campus. Last year, a similar club was attempted, but was never able to get off the ground. When Wheaton heard about this attempt at a RPG Club, he decided to pick up where the old club left off.

For Wheaton, starting a club like this is nothing new. In high school, Wheaton had already started an RPG club and had the intention to do the same at Mercyhurst.

“When I learned that a club had already been attempted, I felt like I had to jump at the opportunity to continue it,” Wheaton said.

An RPG is a game in which the players assume the roles of the characters they are portraying by either controlling avatars, speaking or performing the actions of their characters. The game is proctored by a Game Master, who controls the formal rules and guidelines from which the game is played and arbitrates the results of the players’ actions. What is unique about RPGs is the fact that they require much more social interaction and collaboration than other games, which generally stress competition.

Wheaton hopes that his club is able to succeed. Currently, the club meets every Thursday at 4 p.m. at the “half moon lounge” in the student union. The club has already met to engage in what is called live action role play (LARP), which is role play in which players act out their roles. In the future, the club hopes to play Vampire the Requiem and Star Wars as RPGs. The club intends to have more meetings as they grow membership.

If you are interested in getting involved with the RPG Club at Mercyhurst, please contact Charlie Wheaton at charlie.wheaton@gmail.com.