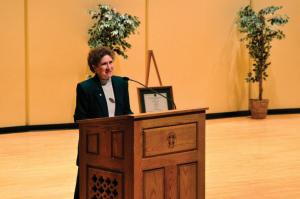 This year’s honoree, Lacey, has dedicated 25 years of her life to helping refugees in Africa, Southeast Asia and the United States.

The Dalai Lama recognized Lacey in 2001 as an “Unsung Hero of Compassion.”

Lacey holds a master’s degree in social work from the University of California, Berkeley, and in 2009, she published her memoir, “This Flowing Toward Me: A Story of God Arriving in Strangers, through Ave Maria Press.”

Freshmen will recognize the book as this year’s freshman reading requirement.

The award Lacey received is named after the Archbishop of El Salvador, Oscar Romero, who was assassinated while celebrating Mass in 1980. The award has been given at Mercyhurst since 1991, when Jesuit activist Daniel Berrigan became the first honoree.

“The Oscar Romero award is important as an opportunity to reflect on and in some way internalize cardinal values of Mercyhurst, the inspiration and call to faith and justice,” Dr. Thomas Forsthoefel, chair of the religious studies department, said. “The event honors an individual who has expressed those values, so grounded in a gospel ethos, in an exemplary way.”

“The award has always been an opportunity to remember and focus on the deepest instincts of the gospel and the founding inspiration of Mercyhurst,” Forsthoefel said.

Lacey spoke to the college community after receiving the award.

She told stories about her experiences with refugees and commented on the love and joy she experiences from social work.

“When I was a young nun, I first discovered the Bible and this amazing God who was always welcoming us,” Lacey said.

She described humans by saying, “All of us are caught in God’s embrace… . We are all kin.”

Since Lacey first visited Mercyhurst in March 2009, the college community and Mercy Beyond Borders have shared a strong relationship.

Many students and faculty members have helped the group with service and fund-raising projects, and Mercy Beyond Borders named Mercyhurst its “Ambassador of the Month” last June.

For more information on Lacey or Mercy Beyond Borders, visit mercybeyondborders.org.