Tyler Stauffer photo
Stimulating. Unique. Brilliant. These words could be used to describe the musical experience that is Sonos. Mercyhurst College was lucky enough to have this sextuplet grace the stage of Taylor Little Theatre on Friday night.

Student Activities Council (SAC) was able to book this performance in October during a NACA conference. Since then, Sonos has released their first album, which was performed at the Sundance Film Festival, and has also had numerous performances across the country.

What makes Sonos so unique is what they do. They are not your average band, taking songs from the past and the present and turning them into incredible acapella arrangements.

Sonos has the amazing ability to take songs and make them refreshing and enjoyable. Every song kept the audience extremely attentive and excited about what they were going to do next.

Hailing from Los Angeles is definitely eclectic. Although they all studied music, the band members’ specialties range from opera to musical theater to jazz. Each member brings out his or her trait that makes Sonos the amazing group it is.

With covers varying from the Jackson 5 to Britney Spears, there was something for everyone. A crowd favorite was decidedly Spears’ “Toxic,” with an encore being requested by the audience.
Group members alternated solos depending on the song. One of the members even beat-boxed, making inhuman noises with his mouth. 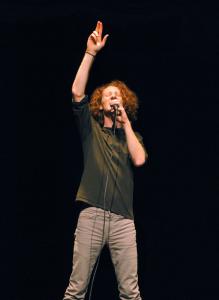 Tyler Stauffer photo
Each number was so full of sound that it made it hard to believe there were no instruments accompanying the group.

Every piece had the audience toe-tapping, a surefire sign that the Sonos performance last Friday night was a definite crowd pleaser.