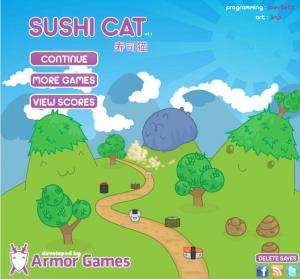 Cons: It is a one-time play, unless you hate cats or the Japanese; then don’t play it at all.

Sushi Cat is a fun little game that comes from Armor Games.

It is cute, it is fun, and it is silly; it is just a great game.

Sushi Cat centers around an overweight cat who is in love. He is trying to get to the female cat he likes. However, no matter how hard he tries, he is never fat enough to get to her. So the cat rolls and bounces to get sushi to make him fatter and get to his true love.

What can be said about Sushi cat is only good things. It is a great game to waste time, it is fun to look at, and it is such a fun premise.

Really, who can hate a game about a cat that eats sushi? It is a game of pure mindless fun that players can’t help but to love.

If anything can be said against Sushi Cat, it is that the game is probably only a one-time play. Once you have played it, players might feel that there is no real reason or want to play it again. Basically, after the first instant gratification, it then wears off and you feel like you are done with it.

In the end, not be much said about Sushi Cat except that it is mindless fun that you can’t help but to love. However, after you play it once, there is no real desire to play again. If you like this game and want to talk to me or others about this game, then go to Mercyhurst Game Geek on Facebook.com