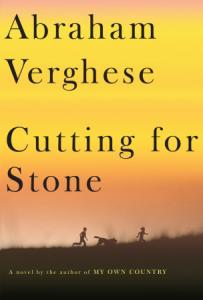 Contributed photoA national bestseller and hailed by the Los Angeles Times as “lush and exotic,” “Cutting for Stone” by Abraham Verghese is the story of half-Indian, half-white twin brothers growing up in Ethiopia in the mid-1900s.

Their story is full of mystery: Born of an Indian nun who dies in childbirth, the twins never know their father, the surgeon who operated on their mother trying to save her life. Ultimately failing her, himself and his sons, whom he abandons on that day, the father leaves the country in the midst of confusion and pain.

The twins, Marion and Shiva, are raised by two of the other doctors at the hospital who knew their parents well.

Marion narrates the tale, beginning from the beginning and not stopping until the end, a phrase that is used recurrently throughout the story. He starts with the story of his mother, Sister Mary Joseph Praise, and as her life intertwines with his father’s life, he tells the story of his father, Dr. Thomas Stone.

And so it goes for the rest of the novel; when a new character is introduced, the reader immediately gets the history of the new character, as it often adds new, interesting layers and connections to the story as a whole.

As the twins go through life, they are confronted with challenges, and how they deal with these challenges ultimately defines their lives. Shiva, along with the love of Marion’s life, Genet, betrays Marion, placing a deep resentment between Shiva and Marion. Genet then betrays Marion again, this time forcing him out of the country. By this time, Marion is in his early 20s and has no problem finding an internship in New York and becoming a surgeon, like his adoptive father.

What happens in New York will change Marion and Shiva’s lives forever, with only one of them surviving, but as Marion notes, without both, neither can survive.

Verghese definitely has a talent for spinning stories, as can be seen in the chapter-length description of each character, even minor ones. And while with a different author these could be considered drawn-out and unnecessary, with Verghese’s writing it seems that each word he includes adds to the story in some important way.

The only downfall of this is the extremely graphic parts of the story that describe surgery procedures. In a story in which almost every character is a doctor or surgeon, the medical procedures are many and detailed, even explicit at times. Readers with a light tolerance for this type of thing might want to be careful, as sometimes these descriptions were too much for me.

It cannot be argued, however, that these descriptions add a certain kind of credibility to the story, and one can only admire all the hard work that Verghese obviously had to put into this novel to make it medically accurate.

Although 600-plus pages, this novel has a plotline that is anything but slow, and with portrayals as rich as they are, one should have no problem reading this novel, and don’t be surprised if it doesn’t take you as long as you thought it would.

Verghese has two other bestselling novels, both nonfiction accounts of his experiences as a doctor inside America, dealing with issues from AIDS to the demise of his marriage. They are called “The Tennis Partner” and “My Own Country.”