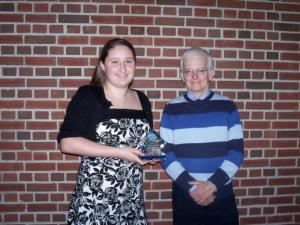 Mercyhurst College is proud to recognize sophomore Jessica Clemente for her nomination for the Barry M. Goldwater Scholarship.

Although this is a very prestigious nomination, it’s not all celebration and relaxation for Clemente. She still awaits the final results with her hat now in the ring with more than 1,000 other intelligent and competitive students nationwide.

The prestigious scholarship is for the amount of $7,500 per year, which could be used to cover various costs including tuition, fees, books, and room and board. The Goldwater Scholarship aims “to provide a continuing source of highly qualified scientists, mathematicians, and engineers by awarding scholarships to college students who intend to pursue careers in these fields.”

This 24-year-old Excellence in Education Program was established by Congress to honor Sen. Barry M. Goldwater, who had a long distinguished career as a soldier and statesman.

Clemente, who is a sophomore at Mercyhurst College, is working toward her undergraduate degree in biochemistry with a focus in neuroscience. She said she is very excited to have been nominated.

“This is a great honor, and if I win, of course that money will be a tremendous help toward pursuing my academic goals,” Clemente said.

Clemente, who beat out four other Mercyhurst students for this nomination, went through a long and challenging application process.

“I had to go get several letters of recommendation and write some of the most challenging essays I’ve ever done. These essays required a very specific scientific approach which was something I had never had to do previously. These were not your regular College Writing I essays.” Clemente said.

“Mercyhurst College chemistry majors have a track record of being competitive for these awards. The Goldwater Scholarship is the most prestigious of all undergraduate science awards. Earning the Mercyhurst College nomination for the Goldwater Scholarship is an honor and speaks to the outstanding academic and research record that Ms. Clemente has established at the college in just two short years,” Chambers said.

“As a reviewer on the Goldwater Scholarship Selection Committee, I saw firsthand the hard work that Jessica put into her application. I also know Jessica personally, as I have had her as a student and she is active in undergraduate research in chemistry with a colleague of mine,” Pharr said.

“She is an excellent student, and has immersed herself in her field of study (through research) at a very early stage in her undergraduate career. This scholarship is awarded at the national level and is highly competitive. The Chemistry Department and the Mercyhurst community are proud of her accomplishment,” Pharr said.

“I have had Jessica in some of my most difficult courses and she has always been one of the top performers in those classes, receiving some of the highest test scores that I have ever seen in my five years at the College. This nomination recognizes her as one of our emerging young talents at the college and will aid her is securing highly coveted positions in her chosen field in the future,” Mauro said.

Clemente said she learned a lot from this experience.

“I learned a great deal, especially on writing and editing scientific papers. I would like to thank Drs. Mauro, Griffiths and Pharr for their help in this process. I’d like to especially thank Dr. Chambers, who gave much of her own time to help me perfect my essays; I truly appreciate all she did to help me,” Clemente said.