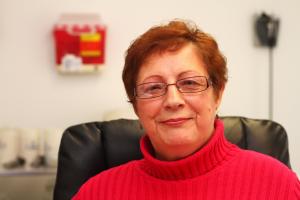 Nurse Dimperio will retire after 16 years of mothering sick students at the Cohen Health Center.

After several family deaths and months of not working, Christine Dimperio answered a phone call. In spite of concerns about interacting with students, she accepted the part-time job at Mercyhurst College and told her husband, “Maybe the voice of God is talking to me.”

Sixteen years later, Christine Dimperio is retiring from her position as nurse director of the Cohen Student Health Center. Of a staff team who has worked together for 15 years, Dimperio will be the first to retire.

As nurse director, Dimperio supervises day-to-day operations and performs both administrative and clinical duties. Over the years, Dimperio has taken more than 50,000 temperatures, prescribed roughly 150,000 ibuprofens, and, despite having no children of her own, mothered 64,000 sick students.

Those staggering numbers do not indicate monotony, however. “Everything is not the run-of-the-mill sore throats,” Dimperio said. “Sometimes everything can be weird.”

In fact, Dimperio sometimes teases students about meeting in Egan to organize “stump the nurse day.” Additionally, changes in privacy acts, medical regulations and the overall student awareness of health issues keep daily operations interesting. “Every day is a learning experience,” she said.

Although the majority of cases fall under upper respiratory conditions, Dimperio also sees many sinus infections, gastrointestinal bacteria and sports injuries. However, the health center staff stays up-to-date on diagnostic procedure for those students who “stump the nurse” with more uncommon conditions.

According to Dimperio, contact with students is the most rewarding and most difficult aspect of her job. “You get attached to them so quickly,” she said, “and you hate to give someone bad news.” The second best part of her job, of course, was working on the campus schedule. “We need those breaks to recharge our batteries.”

“It’s been a fun journey,” Dimperio said, “and it was a hard decision to retire.”

In retirement, Dimperio will volunteer at local charities, baby her pet dog and travel with her husband. This fall, she plans to travel to Arizona, but first she wants to spend her summer fulfilling the most important item on her to-do list.

“I’m going to pull out the lawn chair and watch the clouds roll by,” she said.