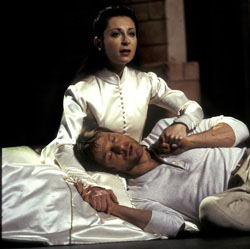 Contributed photo
In the next Metropolitan Opera Simulcast presented at Mercyhurst College’s Performing Arts Center (PAC), there is a clear connection between music and literature.

The opera “Hamlet,” composed by Ambroise Thomas in 1868 with the help of French librettists Michel Carre and Jules Barbier, was inspired by Shakespeare’s tragedy of Hamlet, Prince of Denmark.

Following is a breakdown of what happens in the opera.

Act I: Just a little after the death of King Hamlet, widowed Queen Gertrude remarries Hamlet’s brother, Claudius. The ghost of his father haunts Prince Hamlet and tells him he was murdered by Claudius and demands that Hamlet avenge his murder.

Act II: Ophelia, Hamlet’s lover, attends court and sees that Hamlet is acting distant. Hamlet arranges a play to be performed at court to bring out the guilt of Claudius and Gertrude for the murder of the King. Claudius erupts in anger and Hamlet takes the crown from his head in an act of disrespect.

Act III: Hamlet tells Ophelia he no longer loves her and tells her to join a convent. Ophelia leaves in complete distress. Hamlet then approaches his mother regarding the role she played in his father’s murder. She begs for forgiveness and the ghost of the king returns to talk to Hamlet.

Act IV: driven by the grief of her father’s death and the loss of her lover, Ophelia descends into madness.

Act V: Upon realizing the tragedy that had taken place while he was away, Hamlet seeks vengeance for the death of his father.

The single, most-talked-about moment in “Hamlet” is Ophelia’s mad scene. Its passion and drama is thought of as one of the greatest moments in opera. In this MET production, Ophelia will be played by soprano Marlis Petersen. The stage will be shared by Jennifer Lamore (Gertrude), Toby Spence (Laertes), James Morris (Claudius) and Simon Keenlyside (as Hamlet).

The simulcast will take place on Saturday, March 27, at 1 p.m. Tickets are $15 for Mercyhurst students with ID.