'An Education' tells story of growing up 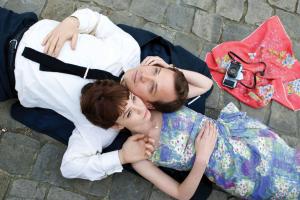 pac.mercyhurst.edu photo
As a student in the wonderful world of academia, you, someone you know or society at large will eventually ask: ‘OK, you’ve made it this far, now what are you going to do with the rest of your life?’

Whether this involves furthering your education, getting a job or starting a family, the expectations of those around you and your expectations of yourself will have to be taken into account. But sometimes something will happen in our lives that will take these plans and reverse them.

“An Education,” this week’s addition to the Guelcher Film Series, grasps this idea and runs with it. Anyone who’s ever been a teenager can easily identify with the protagonist, 16-year-old Jenny (Carey Mulligan), who is desperately anticipating the day she can remove herself from her family’s conservative chokehold and escape to Oxford. She is energetic and smart, and anyone who’s even slightly in tune with ‘boy-meets-girl’ plotlines knows that this is a recipe for disaster.

Enter our devastatingly handsome, albeit slimy, antagonist, David (Peter Sarsgaard). Like any good boy who sees a girl he likes, David approaches Jenny when she’s lugging her cello, and they engage in an animated conversation on British composer Edward Elgar. David is everything Jenny’s life lacks – he is charming and wise of worldly ways, chivalrous, attentive and has a tantalizing knowledge of a world into which Jenny is only beginning to dip a toe.

David spirits Jenny off to art auctions and concerts, feeding her curiosities in strategically concocted bites. Surprisingly enough, Jenny’s stodgy parents are enamored with David as well, and are hopeful he can advance their daughter through cutthroat Victorian-era Britain.

But unlike your typical romance, with the predictable fight, breakup and miraculous, ‘who-woulda-thought’ reconciliation, “An Education” takes a radically different course, highlighting its light-hearted nature.

Jenny and the audience both are gradually shown David’s true colors, an inevitable process which Sarsgaard masterfully and believably delivers. Jenny is unique in her awareness, however, still clinging to her desire for that unknown and alluring world of which David has only shown her a glimpse. She is determined to see this education through to the very end, despite any personal or societal consequences. For the audience, this means an ending which shouldn’t be missed.

“An Education” shows in the Mary D’Angelo Performing Arts Center today at 2:15 and 7:15 p.m. Tickets are and free for Mercyhurst students with ID.